“There is not prettier topology than Moebius one to designate the continuity of near and far, interior and exterior, object and subject in a same spiral, where interlace together the screen of our computers and mental screen of our mind. It is the same model in which information and communication come apart and back in a sort of incestuous circumvolution: it is that they works in an undefined continuity; of question and answer, event and image, which cannot be solved outside the ring; simulating the mathematical figure to infinity.”

This quotation illustrates perfectly the new complexity of the contemporary urban space with its particular architectonic, which begins to grows in our professional magazines and emerge timidly here and there in our town’s landscape.

What is real, what is reality? Is well illustrated by the ancient dilemma of Chang Chou. Dreaming to be a butterfly and not knowing very well who he was: Chou dreaming to be a butterfly, or a butterfly dreaming to be Chou. Our space perception was always mediated by techniques, each technique offers its own virtually. Thus, Saint Exupery noticed such scale confrontations where houses seen from the air looked like small white sheep’s. The confrontation of textures and landscape appear in a reality that become a hyper one by the effect of enlargement. Between textures of landscape and forms of architecture hides the virtual, which peeps to give itself into spectacle.

The specificity of the contemporary space is more and more characterized by notions in form of a pair, realizing them shelf according to the moebius principle. It is no more the private or public character separately that characterize an architectural complex space, but real-virtual binary relations: public private; exterior interior, transparent opaque, etc.

The ICT and the urban space

The geographer Jacques Levy distinguish in the town structure the center with its density and social diversity, meta-urban space places that links centers by complex objects such as airport, railway stations, etc., para-urban spaces agglomeration without diversity attributes such as ghettos, industrial zones, … and rural space. All these form a city with its geographically located citizens and a virtual town with it deterritorialized “netziens,”  superposed to the same territory.

Since the MacLuhan planetary village expression, the city metaphor concerning the information nets has been developed. All these territories called sometimes “post industrial Meta-City”, Virilio’s «Mediate City» will no more be built by architects and engineers but mostly by computer scientist. Because in such “Electropolis”, a great part of social and economic activity will no more need a spatial reference to exist. The city has always been a place of goods and information exchange, and the ICT by their function of global public space have a radical impact on public and working urban spaces, which are rapidly delocated. The causes of delocalisation are multiple and the following acting factors can be enumerated: “teleaction”, tele-presence, ubiquity, a-spatiality, a-temporality.

With “mondialisation” and ICT, the State is loosing its substance, because it’s belonging to a territory, it is territorial. Territorial globalization is done in two ways: by erasing anthropological boundaries, and by a partial loose by the city of its role as a place of exchange of information in the built sense. The comprehension of the city form and meaning depends on the way its treats the information and communication processes. But this comprehension depends also on how the city is loosing its function of production, exchange and treatment of information, moving them partially toward the cyberspace, and developing by consequence new forms of social spatial organization at a local level. Future electronic district tele-centers are different from the forecast electronic villages, because they are a social and  multi-professional mixture at the local level. The local, who is and will stay essential to human condition, is described by Denis de Rougemont as “regionalist ideal” or by Ervin Schumacher as “small is beautiful”.

Architectural discipline has always faced the virtuality of the construction. In today approach experimental architecture practice and paper-screen architecture are mixed. This last one, virtual architecture do not resides only in cyberspace, it is dwelled in the narrow tight association between reality and virtuality. There is often more novelty in the application of computers to the project than into the transposition of the project notions to the cyberspace. Never architect found himself confronted with so many material and virtual innovation tools. From its origins architecture has embraced the permanence side. Can it now accommodate to a fugace existence mode, which evokes computer screen?

In front of a sort of stop on the image in the middle of a continuous transformation process the architectural form is destabilized. Bernard Cache and Objectile agency are particularly clear on this point when they present their Semper Pavillion project as “ a particular case in a unlimited serial produced by the digital production machine.” This destabilization can be read in the back and forth movement which appear in the vocabulary of curved, soft volumes with organic connotations, and a notions taken from the mineral world as sharp, crystal and broken glass. Pockets and bulbs from one side and branches, blades and points on the other. The association of these opposed elements applied to the architectural form testifies of the actual professional and theoretical uncertainties. Taken in the field of flux and forces, under the effect of polarities its seems to loose its object main character to be seen as a transitory configuration. Francois Roche illustrates this when he affirms that he wants “to make an architectural object equivoque and oblige it to get out the real.” Is this search of the virtual comes from the mounting strength of the thought, or  is in the contrary issued from its unfortunate weakness, which demands desperately to visualize non-realized desires?

The form destabilization comes often together with the accentuation on ephemeral programs: “kiosques”, exposition space, mobile dwelling. The Buckminster Fuller’s notion of «ephemerization» seems to be  completed with the continuous programming of mega-project. Between these two scales virtual architectural forms follow patterns, motifs and textures from one side, and digital urban landscape from other.

One can ask with Fredeirck Langlois if a screen real time complex geometry is the answer to the information revolution, which is on the process of changing our way of thinking and of behaving in our daily environment? Will the answer be, a reduced and extrapolated model of Bill Gates electronic house, with its adaptable technical characteristics according to the user’s desire, together with a profusion of high-tech interfaces, or will it be the  so called architectural blob”, a complex form dexterously created coming directly from the hyper or transarchitecture tendencies? (Illustration I) 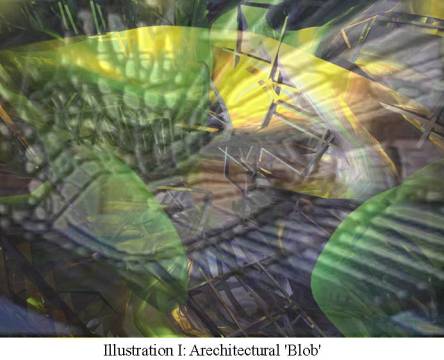 Many are those who thinks that the most immediate effects of the digital revolution in architecture will be made at the level of space organization. Certainly it will be so. But, it is also sure that architecture will know how to take from its own contemporary architectonic resources. It will without any doubt develop the experimental vocabulary already in process through: play of transparencies, textures scale deformation, moebien’s space and attributes relation, etc. But, it will also develop the crucial design-construction polarity through the complex and dynamic ideas issued from screen architecture linked to digital robot construction machines. (Illustration II) Brendan MacFarlane says that the aim of his Cafe Beaubourg project was mainly to approach the “skin idea, of a world promises sensuality, something almost living, where deformation is almost animal.” 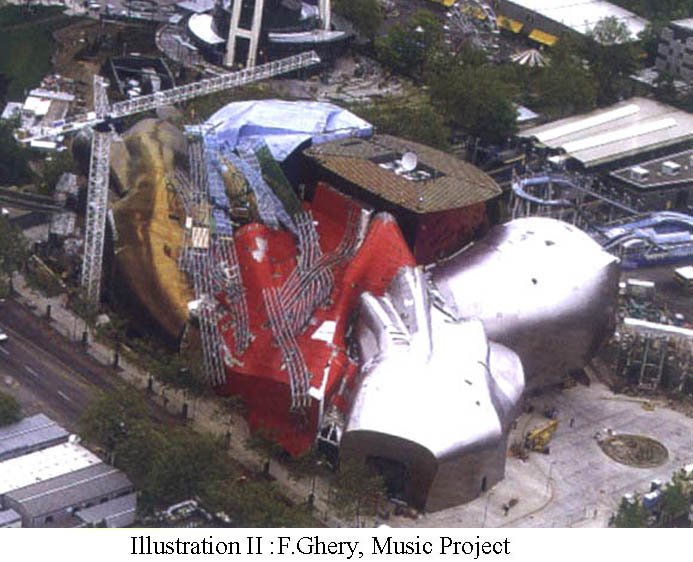 In E-topia W.J. Mitchell remarks that the introduction of digital web is provoking a radical restructuration of urban schemas, but these nets do not make the city and agglomerations obsolete. Architects will be confronted to new space use, new activity combinations and new proximity equipment exigencies.

It is easier to speculate on the social and economic problems of the ICT impact on the “city territory” than to tackle what will this impact on the physical matter. The future resulting urban architectonic can be only guessed by divination. Nevertheless, one can imagine some ways of the future environment modifications from actual tendencies.The future city can evolve toward :

the “Bill Gates dwelling model which from the Seattle highs plays a digital gadgets            demonstrator in a house without any architectural quality, but full of captors, giant screen and microprocessor which are here to make the lieu “intelligent””;

-        the complex appearance of these architectures, which are supposed to represent the information circulation, net fluidity and exchange dematerialization;

-        letting the people enrich the “lieu” with their emotions thanks to an “elastic” approach, in creating continuously an environment so that landscape and dwelling becomes multiple.

Will the information society give birth to a new model of environment? The new society information society architectural environment will become an artificial global nature, unifying the material and virtual artifact aspects in hybrid systems. These hybrid systems will have to be invented. They will be composed of physical and virtual lieu from one side, and of transport and telecommunication relation from other. These hybrid systems have to meet the complex layer structure of modern reality together with its deterritorialization and ubiquity in our mind on one side, and be local as our body and feeling are on the other.

It is difficult not to be agree with W.J. Mitchell when he writes “ The city which will propose new “socio-cultural” quality forms mostly appreciated by individuals, and will offer an agreeable physical environment, will be susceptible to attire and retain those who electronic era will have liberated from geographical bounds. If electronic and software allow to live and work practically anywhere, why not choose the city of our dreams.” But islands of dream are rare for the moment, and are divided in natural lieu of exceptional beauty; or in artificial lieu, where history in a subtle amalgam of signs, symbols, mimesis and architectonic created exceptional ”genuis locci” space, the design secret of which is unfortunately still almost completely hidden.